Who is Mark Phillips?

I’ve always been fascinated with graphics and special effects. Growing up I loved watching X-Men and Power Rangers and at school I enjoyed creative subjects such as art and design. At A-level I studied graphic design, media and fine art and that gave me the chance to explore different areas. I then went on to Staffordshire University to study Film Production Technology. Exploring different areas of the film production process allowed me to really specify which area I wanted to focus on. With my background, motion graphics really spoke to me because it allowed me to combine all my skills and interests. My work is inspired by art, music and film, and I’m especially interested in space and technological themes.

I am lucky enough to have had a focused direction to my career – knowing I wanted to work as a motion graphics designer has helped me achieve success so far. After University I freelanced for a while on a variety of different projects including designing flyers for DJs, working on designs for apparel companies, editing music videos and I even designed branding for a company who supplied mobile planetariums to schools. I then landed my first full time motion graphic design position at an award-winning video production company based in Birmingham, which dealt with a lot of high profile retail clients and web companies. It was there that I had the chance to hone my skills, learn a lot about the industry and work with some great people too. After two and a half years I decided it was time for a new challenge and headed to Switzerland to work for UEFA where I spent a year designing motion graphics in the build up to Euro 2016. The tournament itself was an intense 6 weeks during which I worked with a team of 4 designers creating content for 51 matches, promotional films, team features and stats pieces, all of which were distributed to different broadcasters around the world.

Apart from working in Paris for Euro 2016, my greatest achievement is now being able to support myself as a freelance designer – something that spurs me on every day. I love creating motion graphics, working on exciting projects and learning new techniques in my spare time. It’s an industry which changes rapidly, it’s exciting to be a part of and I’ve still got so much to learn myself.

My most notable work as a designer was a promotional film made on site during UEFA Euro 2016 in Paris, which hyped up the semi-final encounter between France and Germany. I worked with a small team and used my design skills to create wings for butterflies within Photoshop – the butterflies, which represented each nation in the tournament were then modelled, rigged and animated in Cinema4D and then taken into After Effects for a final composite to give it a stunning result.

As a motion designer I’m always looking to grow and develop my skills – I know it’s down to me. If you work hard, stay focused and really love what you do, you can achieve anything. 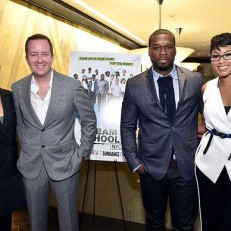 Dream school: NYC, Sundance TV
Lisa Forrest is editing ‘Dream School: NYC’ at Fresh One, premiering 1st October on Sundance TV ‘Dream School: USA’ returns for a second series, this time based in N
SPOTLIGHT: Katherine Lee – Editor
Who is Katherine Lee? I’m a documentary editor from a drama background. I grew up in Australia, and in 1999 I traveled to the UK in search of adventure and ended up making it my home.

Olly Robertson – Motion Graphic Designer
Who is Olly Robertson? I’m a motion designer living in London. I’m a very creative person and while motion design is my main practice, I do all sorts of other things in my spare time suc